“Yogyakarta and Gudeg” those two words are inseparable in the use of explaining what Yogyakarta is. Having the authentic taste of Yogyakarta, Gudeg is not only an identical food of Yogyakarta but also deeply rooted as a cultural legacy. “What should I do in Yogyakarta?” one certain answer you will get is “Don’t forget to try gudeg!”. With hundred-years recipes preserved from generation to generation, the taste of gudeg will truly disclose the signature taste of Yogyakarta

We will start with visiting a highly-acclaimed gudeg restaurant in town, Gudeg Yu Djum. Gudeg Yu Djum stated in several spots, but we choose one that located near the heart of Yogyakarta’s central tourism district. On Wijilan Street Number 31, Kraton, Yogyakarta. Wijilian is a name of tourism area near Keraton Yogyakarta Palace. Wijilan itself well-known as gudeg’s central area. Once you step in the gate of wijilan, sculptured stone gate with signs written “Selamat datang di sentral makanan khas GUDEG”, the view of many gudeg restaurants will snatch your attention.

Visitors need to walk along the street to find Gudeg Yu Djum restaurant which located in the middle of the Wijilan Street. A portrait of an old woman on a restaurant board, Yu Djum herself, is a cue that you might have arrived.

A homey and Yogyakarta-ish touch on the restaurant will greet your eyes. Brownish shades dominating the colour of the restaurant, matches with the gudeg itself. The well-kept cleanliness is another plus point for Gudeg Yu Djum.

The Signature Taste of Yogyakarta At the front of the restaurant, sight of well-cooked chopped chicken and hard-boiled egg with brownish colours shall greet and seduce customers to order some. Not to forget a golden bit of beef skin (krecek) completing the side dish options you can choose.

You will eventually meet young jackfruit dish sweetened with brown sugar (gudeg) on your plate with regular accompaniments of white rice. Along with egg, chicken and some krecek to complete the dish (Rp 15.000).

The sweetness from gudeg, eggs, and chicken match along with the unique texture of the spicy krecek.  Balanced with little savoury from eggs and chicken and being neutralized by the plain taste from white cooked rice. The dominance of sweet taste combined with spicy and savoury will satisfy your taste buds. 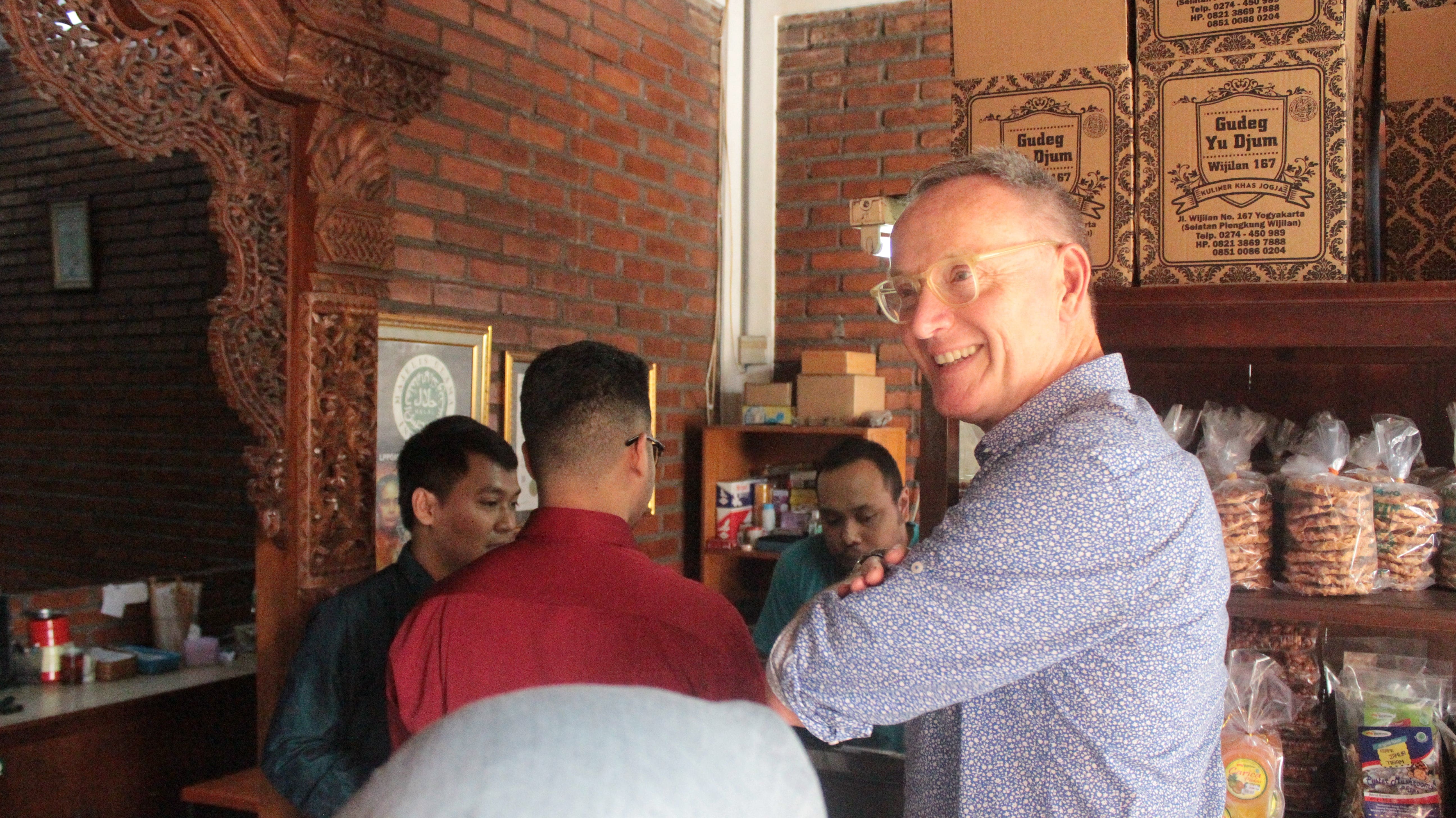 Hence all the menu is written in Bahasa, foreigners need to understand several keywords. Although several of the waitresses are capable to understand English, there were several cases that they don’t.  Here are several tips for certain conditions

1. Vegetarian buds: Because gudeg contain egg and chicken you can say “Tanpa Telur dan Ayam” (without egg and chicken). So the waitress will take it out from your serving plate.

2.       I hate spicy food: Krecek sometimes tastes too stingy for several people with a low tolerance for spicy food. You can say “Tanpa Krecek” (Without krecek) or you can instead said “Tidak pedas” (Not spicy).

3.       Sweet? Err? : The dominance taste for gudeg is sweet. So if you don’t too much sweetness in your plate you can say “Tidak terlalu manis” (Not too sweet). The waitress will adjust the portion for the gudeg.

You will not only found the signature and the character of Yogyakarta solely from its food. From the very first time you stepped in the restaurant, you will perceive the way Yogyakarta’s people are giving the service, how culture bids the way we treat customers. Accomplish the meaning of signature taste you shouldn’t miss.